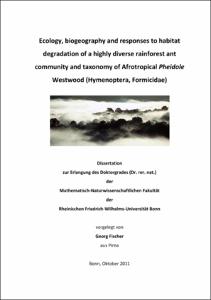 This thesis is about the Kakamega Forest ant fauna in Kenya. With currently 329 ant species the region is the most diverse ever sampled in Africa and, in terms of altitude and biogeographic distribution, probably also one of the most interesting. Ecologically, the ants of the Kakamega Forest showed high associations between three different niche variables (habitat, microhabitat and foraging). The distribution of most species also showed associations with their habitat and microhabitat use. Furthermore, ant species diversity and their ecological functions decreased with an increase in habitat degradation from forest to farmland habitats. In order to describe some of the new species found in the Afrotropical rainforests, a taxonomic treatment of the hyperdiverse genus Pheidole was included in this thesis. Therein, several new species groups were defined and seven new species were described in a systematic revision of the Pheidole pulchella group.