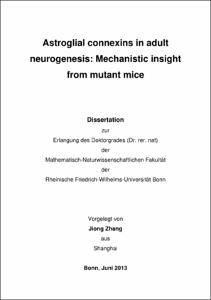 For astrocyte restricted connexin mutations/deletions the Cre/loxP system of site-specific recombination method was applied in this study. However, the Cre recombinase mediated gene deletion/activation is not free of limitations (Eckardt et al., 2004; Requardt et al., 2009). Since it affects every process in our adult neurogenesis study, it is critical to overcome such pitfalls using a series of quality assessment. With PCR, immunodetection and reporter gene approaches, we show that the widely used hGFAP-Cre transgene exhibits spontaneous germ-line recombination leading to deletion of Cx43 gene in brain, heart, ovary, testis and tail tissue with high frequency. The ectopic activity of hGFAP-Cre requires a rigorous control. We also observed the nestin-Cre transgene shows germ-line deletion. Here we describe procedures to identify mice with germ-line recombination mediated by the hGFAP-Cre and nestin-Cre transgenes. Such control is essential to avoid pleiotropic effects due to germ-line deletion of loxP-flanked target genes and to maintain the astrocytes-restricted deletion status of Cx43 in transgenic mouse colonies.
Adult hippocampal neurogenesis generates functional new granule neurons that become integrated into the DG throughout whole mammalian lifespan (Gage, 2000). Despite of the growing number of studies in the past decade, the exact regulatory mechanisms as well as the functional significance of adult neurogenesis are still not fully elucidated. Moreover, only few parameters have been assessed to characterize the regulation of adult neurogenesis, i.e. cell proliferation in the SGZ, cell survival and neuronal differentiation (Kempermann et al., 2004). Astrocytes with RG-like morphology are considered neural stem cells (type-1) in the SGZ of the DG (Kempermann et al., 2004). Recently, Cx30 and Cx43, two major astrocytic gap junction proteins have been shown critical for proliferation and neurogenesis in the adult hippocampus (Kunze et al., 2009). However, the underlying mechnisms of the obseved decrease on adult neurogenesis are not clarified. To gain the mechanistic insight into connexin function related to adult neurogenesis, we employed several Cx30 and Cx43 mutations in the present work.
In the second part of my work I first analyzed the influence of Cx30 and Cx43 on adult neurogenesis. In contrast to WT mice, single knockout of Cx30 did not impair the number of dividing neuronal precursor cells and mature neurons in the DG of adult mice. However, the complete deletion of Cx43 in astrocytes significantly decreases the proliferation and granule cell numbers. These effects are similar to those obtained in Cx30/Cx43 DKO mice (Kunze et al., 2009). Moreover, utilizing a fate mapping approach it has been shown that differentiation, maturation and integration of newly born neurons were not altered in Cx30KO mice compared to WT. In the immunoblot analysis our data revealed no apparent alteration of Cx43 protein amount in the hippocampus following deletion of Cx30, indicating that unchanged adult neurogenesis in Cx30KO mice is not due to up-regulation of Cx43. Our findings suggest that Cx43, but not Cx30, is required for normal adult neurogenesis. The Cx43G138R expressing mice present a conditional mouse model to study the mechanism linking connexin mutation and coupling to proliferation in the adult hippocampus. The main finding of this mouse suggests that the strong decrease of Cx43G138R mediated astrocyte and RG-like cell coupling is responsible for the observed reduction of adult neurogenesis. Moreover, this impaired proliferation appears to be not associated with the alteration of the mutant Cx43 protein level in the hippocampus. However, the expression of the point mutation Cx43 in the RG-like cells determines the different rate of intercellular coupling and its corresponding effects on adult neurogenesis. To our surprise, astroglia-specific Cx43K258stop mice lacking Cx30 also exhibited significantly decreased coupling between astrocytes and RG-like cells, contrary to the studies in cultured HeLa cells. The functional consequence of the Cx43K258stop truncation is the strongly decreased proliferative activity in the SGZ and the number of newborn neurons in the GCL. Again, our immunoblot data evaluated that the expression of Cx43 amount is similar between comparing groups. Furthermore, fate analysis of BrdU-positive cells associated with the relative expression of DCX appeared to be unaffected in both astroglia-specific Cx43G138R and Cx43K258stop mice. Interestingly, compared to the WT animal the Cx43D378stop mouse also shows significantly decreased astrocytic coupling as well as decreased proliferation. However, the average rate of coupling and proliferation is much higher than the above two Cx43 mutants. Together, our findings strongly favour a role of Cx43-mediated intercellular coupling between RG-like cells rather than Cx43-mediated adhesive interactions for adult neurogenesis in the hippocampus.
In order to investigate the impact of Cx43 post-translational phosphorylation on pathogenesis of TLE, homogenized hippocampal lysates were established and further characterized in immunoblot, IP and MS analysis. An overall changed Cx43 phosphorylation pattern was found in ipsilateral (i.e., the kainate-injected site) versus contralateral (the non-injected site) using an antibody against the Cx43 CT domain. To confirm our results the same samples were assessed again using an antibody which recognized the N-terminus of Cx43, and our data are consistent with the former results. This suggests that in vivo phosphorylation of Cx43 is not only a response to epileptic neuronal activity but is also coupled to the decrease of interastrocytic coupling. A more detailed analysis using phospho-specific antibodies revealed several site-specific phosphorylation patterns of Cx43. Our data indicate that a co-ordinated regulation of gap junction occurs via mutiple kinase signaling pathways, leading to phosphorylation on mutiple sites of Cx43 CT domain. This complex interplay between mutiple kinases made it difficult to determine specific aspects of Cx43 regulation and interpret its functional relevance for gap junctional communication. To overcome the limitation, we developed and established a reliable IP-based method for Cx43 phosphorylation study by MS analysis. Using control hippocampi, three of the phosphorylated sites (i.e. Ser217, Ser244/Tyr247, and Ser372/373) were successfully identified in our MS study. These are the first in vivo data, to our knowledge, to show that phosphorylation of Cx43 in the mouse hippocampus using MS-based discovery proteomics, and our data offer a new possibility for the study of connexin post-translational regulation in TLE mouse model.