Taxonomy and ecology of amphibian communities in Southern Vietnam 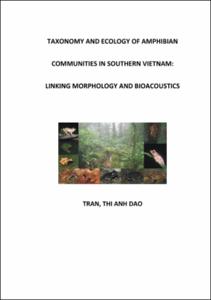