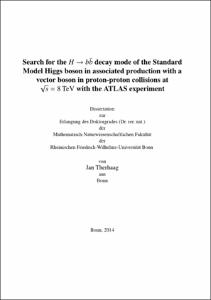 In this thesis, a search for the H→b¯b decay mode of the Standard Model Higgs boson in associated production with a vector boson is presented. The search is based on the entire data-set recorded by the ATLAS experiment in 2012 amounting to 20.3fb-1 of data. A novel search strategy based on a machine learning approach using boosted decision trees and a variable set constructed from Lorentz invariant quantities is introduced.
No significant excess above the Standard Model background expectation is observed. For a Higgs boson mass of mH=125GeV, the expected upper limit on the Higgs boson production cross section assuming the absence of signal is 2.06×σSM, while the observed limit is 3.15×σSM. This excess corresponds to a local significance of 1.1 standard deviations. The ratio of the measured signal strength to the Standard Model expectation is μ=1.40±0.95.