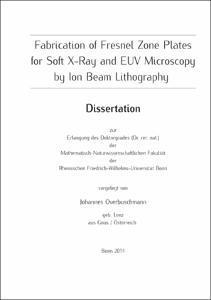 Fresnel zone plates are used as lenses for microscopes in the extreme ultraviolet (EUV) and the soft X-ray (SXR) parts of the electromagnetic spectrum. This thesis describes a novel approach for the fabrication of these zone plates using ion beam lithography (IBL) by focused ion beam milling (FIB). Compared to the commonly used methods, IBL simplifies zone plate fabrication to one single step and shows at the same time almost no material limitations. FIB milling is routinely used for many applications in science and technology. However, its beneficial characteristics have not been fully exploited for the fabrication of X-ray optical elements. Within this thesis, gold-palladium zone plates with outermost zone widths of 121 nm were fabricated using a standard laboratory FIB system. A drift correction strategy was developed to keep the FIB system stable for the fabrication time of several hours. For the first time IBL-fabricated zone plates were applied in a full field EUV microscope, based on a laser-induced plasma source. The functioning of the zone plates was confirmed by achieving imaging resolutions of 172 nm at a wavelength of 13 nm. To increase resolution, zone plates were fabricated using an FIB system that has been optimized for lithography applications. Structure sizes could be reduced to 53% of the original value. Zone plates with outermost zone widths of 64 nm were fabricated on indium-tin-oxide (ITO) samples and applied in a soft X-ray microscope at 2.3 nm. Imaging resolution of 83 nm could be achieved at the electron storage ring PETRA III. Freestanding grating structures show the perspective of IBL for the fabrication of 20 nm structures. This seem to be achievable for Fresnel zone plates in the near future, which makes IBL a promising new method for the fabrication of X-ray optical elements.