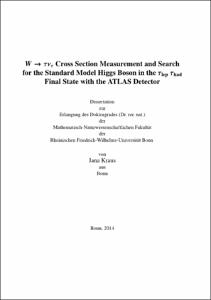 Two measurements based on proton-proton collisions recorded with the ATLAS experiment at the LHC with τ leptons and missing transverse energy in the final state are presented.
The W boson production cross section with subsequent W → τντ decay is measured based on 2010 ATLAS data at a centre-of-mass energy of √s = 7 TeV corresponding to an integrated luminosity of 34 pb-1. The product of the W production cross section and branching ratio is measured to be σWtot X BR(W→ τντ) = (11.1 ± 0.3 (stat.) ± 1.7 (syst.) ± 0.4 (lumi.)) nb.
This is the first measurement of the W→ τντ process at the LHC. It is one of the first analyses to successfully validate the reconstruction and identification techniques for hadronically decaying τ leptons and missing transverse energy.
A search for the Standard Model Higgs boson decaying to a pair of τ leptons is performed with a leptonically and hadronically decaying τ lepton in the final state.
The analysis is carried out on the full 2012 ATLAS data sample at a centre-of-mass energy of √s = 8 TeV corresponding to an integrated luminosity of 20.3 fb-1.
The selection of data events is based on the kinematic properties of a Higgs boson produced via vector-boson fusion or a boosted Higgs boson resulting mainly from gluon fusion.
A deviation from the predicted background is found in data with an observed (expected) significance of 1 (1.7) σ at mH = 125 GeV. The measured ratio of the signal strength to the Standard Model expectation is μ = 0.4 ± 0.6.
In the combination of all H→ττ decay modes an excess in data over the predicted background with a significance of 3.2 (2.5) σ at mH =125 GeV is found with a relative signal strength of μ = 1.4+0.6-0.5. This result constitutes evidence that the recently discovered Higgs boson directly couples to fermions consistent with the expectation from the Standard Model. In particular the compatibility with a mass of mH = 125 GeV is confirmed with this analysis.