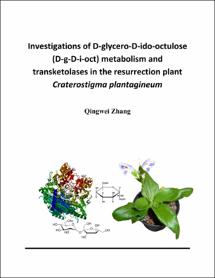 Zhang, Qingwei: Investigations of D-glycero-D-ido-octulose (D-g-D-i-oct) metabolism and transketolases in the resurrection plant Craterostigma plantagineum. - Bonn, 2016. - Dissertation, Rheinische Friedrich-Wilhelms-Universität Bonn.
Online-Ausgabe in bonndoc: https://nbn-resolving.org/urn:nbn:de:hbz:5n-42574
@phdthesis{handle:20.500.11811/6709,
urn: https://nbn-resolving.org/urn:nbn:de:hbz:5n-42574,
author = {{Qingwei Zhang}},
title = {Investigations of D-glycero-D-ido-octulose (D-g-D-i-oct) metabolism and transketolases in the resurrection plant Craterostigma plantagineum},
school = {Rheinische Friedrich-Wilhelms-Universität Bonn},
year = 2016,
month = feb,
note = {Eight-carbon monosaccharides (C8H16O8) occur naturally in a number of higher plants (e.g. avocado and sedum species), but they did not get much attention in research compared to common sugars (e.g. glucose, fructose and sucrose). D-glycero-D-ido-2-octulose (D-g-D-i-oct), an eight carbon monosaccharide has been reported as a rare but abundant monosaccharide in leaves of the resurrection plant Craterostigma plantagineum. When C. plantagineum plants encounter dehydration, D-g-D-i-oct is converted to sucrose that plays a fundamental role in regulating osmotic potential and protecting membranes as well as macro-molecules in resurrection plants. Previous studies suggested that the metabolism of D-g-D-i-oct involves transketolase and the exchange reaction of an alternative Calvin cycle may be responsible for the synthesis of D-g-D-i-oct phosphate. However, the metabolic pathways and the properties of the octulose molecule have not been well investigated. Three different isoforms of transketolase of C. plantagineum and their functions are not clearly characterized. Thus, some questions need to be answered: whether the exchange reaction exists in C. plantagineum and whether the three different isoforms of transketolase in C. plantagineum have the same function, as well as how the three different isoforms are regulated in C. plantagineum?
In this study I focused on the carbohydrate status in relation to desiccation tolerance, developmental stage and selected environmental factors to explore the function of D-g-D-i-oct in C. plantagineum. The transketolases in C. plantagineum were extracted and the recombinant transketolase 3, 7 and 10 were purified. All proteins were tested in the enzymatic assays to determine the reaction products. In addition, the inhibitor of transketolase oxythiamine, was used in the rehydration of leaves of C. plantagineum to determine the activity of transketolase and in the enzymatic assays of recombinant transketolases. Besides, the relationship between D-g-D-i-oct and phosphate was studied.
From the results, it is concluded that desiccation tolerance is regulated by senescence and this reflects the strategy of resurrection plants to adapt to a complex environment. The differences in expression patterns of senescence-related genes and carbohydrate status of senescent and vigorous C. plantagineum plants indicate that resurrection plants or their organs will be prepared in different ways for possible dehydration stress in a developmental-stage specific manner. By analyzing the levels of sucrose, it is found that sucrose synthesis is more inclined to be regulated by water stress than by senescence in C. plantagineum. Light is an important factor for D-g-D-i-oct synthesis. The D-g-D-i-oct level is strictly controlled in C. plantagienum and D-g-D-i-oct was consumed to defend reactive oxygen species (ROS) produced by paraquat. D-g-D-i-oct is also localized in the cytosol and could be exported from leaves. Relative to common sugars present in C. plantagineum leaves, the substantial accumulation of D-g-D-i-oct may propose that D-g-D-i-oct is not primarily a sensing molecule but has a “structural” role. The excellent hydroxyl scavenging ability of D-g-D-i-oct implies that D-g-D-i-oct may be important for ROS scavenging which could further explain the substantial accumulation.
Our study suggests that the three isoforms of C. plantagineum transketolase may exert different functions. The tkt3 plays a role in the photosynthesis and the pentose phosphate pathway. The tkt7 and tkt10 isoforms of transketolase, which show distinct specificity in function and evolution catalyze the formation of D-g-D-i-oct-8-phosphate using glucose-6-phosphate and fructose-6-phosphate as substrate. The activity of transketolase was inhibited by the analogue of thiamine diphosphate, oxythiamine. The transketolase of E. coli could perform the same reactions as tkt7and tkt10. This may indicate that the D-g-D-i-oct and its metabolism might commonly exist in organisms. Although the phosphatase that hydrolyzes D-g-D-i-oct phosphate to produce D-g-D-i-oct could not be identified and characterized so far, the influence of phosphate on D-g-D-i-oct metabolism indicates that the phosphatase exists and is activated by a lack of phosphate and attenuated by an excess of phosphate.},