Characterization of the Role of Insulin, IGF-1 and their Receptor Signaling in Proliferation and Survival of Non-Small Cell Lung Cancer Cells 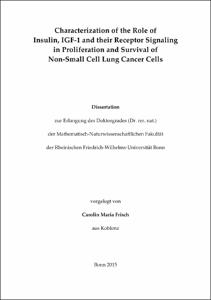 1 Background
Since recent years it has been assumed that the anabolic hormone insulin might contribute to tumor cell proliferation as the cognate hormone IGF-1. This hypothesis was supported by epidemiological studies revealing a positive correlation between type 2 diabetes mellitus and cancer. Moreover, several studies report that long-term hyperinsulinemia constitute a potential cause for tumor promotion. It is thus of great importance to detect possible implications of insulin and the insulin receptor (IR) in the development of malignancies.
In the context of steadily increasing rates of type 2 diabetics, it becomes obvious that much research is carried out in the field of diabetes mellitus therapy. One main objective has been the development of a non-invasive route of insulin administration in order to avoid daily subcutaneous hormone injections. Ultimately, in June 2014, a novel inhaled insulin delivery system has been approved in the USA. However, there are safety concerns as supraphysiological concentrations of insulin over a longer period might support mitogenic processes in the lungs. It consequently has to be clarified whether insulin concentrations which can be achieved in the respiratory system after inhalation, trigger tumor cell promotion in human bronchial epithelial cells.
2 Methods
The focus of the present study was on illumination of the roles of insulin and the IR in different nonsmall cell lung cancer (NSCLC) cell lines (H292, H226 and H460 cells). Effects of insulin - especially in comparison to IGF-1 and TGF-β - were studied by analyzing [3H]-thymidine incorporation, mitogenic signaling and expression of epithelial-mesenchymal transition (EMT)-supporting mediators. Involvement of IR and IGF-1R in tumor cell promoting processes was studied by receptor knockdown (KD) models. Those studies included caspase assays, microarray-based gene expression profiling, [3H]-thymidine incorporation and mitogenic signaling in KD cells.
3 Results
In the three NSCLC cell lines, IR and IGF-1R were present, although with differences in their expression levels. Both receptors were most pronounced in cell line H292. In H226 cells, IR proteins were only slightly (76 %) and IGF-1R proteins were significantly (43 %) less expressed compared to cell line H292. H460 cells revealed the lowest IR protein expression level within the cell lines tested (44 % compared to H292 cells). The IGF-1R protein expression rate was 58 % compared to H292 cells. PCR analysis of IR splicing isoforms exhibited that in H292 cells, IR-A and IR-B were present to a similar amount, whereas in the other two cell lines, one isoform was predominant (H226: IR-B, H460: IR-A). Cell-specific differences were also observed in basal proliferation levels. H460 cells had the highest (25700 dpm) [3H]-thymidine incorporation rate, followed by H226 (5800 dpm) and H292 cells (2400 dpm).
Despite those marked variations, insulin clearly triggered tumor cell proliferation in H292 and H226 cells. 1 μM insulin enhanced the [3H]-thymidine incorporation rate to 280 % and 200 % in H292 and H226 cells, respectively. Notably, those effects were even stronger than effects of physiological concentrations of IGF-1 on [3H]-thymidine incorporation. Anti-proliferative effects of TGF-β (H292: 64 %, H226: 60 %) were cancelled by insulin to control level. Additionally, TGF-β effects on endothelin and N-cadherin expression were also diminished by insulin in H292 and in H226 cells.
Western blot analysis revealed that insulin markedly phosphorylated IR/IGF-1R and downstream Akt proteins in a concentration-dependent manner in the three NSCLC cell lines. However, ERK/MAPK was clearly activated by insulin in cell line H292, exclusively. Receptor studies allowed important insights into the roles of IR and IGF-1R in NSCLC cells. In all three cell lines, even a moderate downregulation of IR but not IGF-1R led to cancer cell death. Accordingly, IR KD enhanced caspaseactivity (H292: 550 %, H226: 430 %, H460: 140 %). In search of mechanistic links between IR KD and induction of apoptosis, genome-wide gene profiling was performed. Indeed, several cytokines which are known to activate caspases were among the most prominent upregulated genes. Gene expression of IL24 was increased most strongly in H292 (78-fold), H226 (5-fold) and H460 (160-fold) IR KD cells compared to LV-sh controls. Moreover, IR KD caused elevated gene expression levels of TNFα by 9-, 5- and 3-fold in H292, H226 and H460 cells, respectively. In order to verify the apoptosisactivating ability of the latter cytokines, caspase 3/7 assays were performed in non-transduced NSCLC cells. TNFα significantly activated caspases (H292: 237 %, H226: 130 %, H460: 231 %). Besides, IL24 led to an increased caspases activity in H292 (127 %) and H226 (116 %).
The important role of the IR for cancer cell promotion became also evident by analyzing mitogenic Akt signaling in IR KD cells. In H292, H226 and H460 IR KD cells, insulin did not lead to an Akt protein phosphorylation via IGF-1R activation. Furthermore, in H292 cells, 1 μM insulin significantly increased the [3H]-thymidine incorporation rate in IGF-1R KD cells to 226 % compared to control cells (without receptor KD).
4 Discussion
Safety concerns about long-term treatment with inhaled insulin remain as insulin was found to be involved in mitogenic processes in the NSCLC cell lines tested. Thus, an inhalable insulin therapy should be strictly prohibited for patients suffering from lung cancer. Moreover, patient groups with an increased prevalence of cancer entities in the respiratory system, e.g. smokers, ex-smokers, people being exposed to air pollution or patients with chronic inflammatory diseases, should be excluded precautionary from an inhaled insulin administration.
Beside insulin’s mitogenic effects, it was detected that the anabolic hormone appeared as functional antagonist of TGF-β in H292 and H226 cells. Therefore, it could be interesting to analyze possible links between the insulin and the TGF-β signaling pathways in further studies.
Surprisingly, it turned out that the IR is essential for cancer cell survival in all cell lines tested. IR KD induced apoptosis. Vice versa, the IR could possibly prevent cancer cells from apoptosis. Beyond, KD data revealed that insulin triggers proliferative effects not only via IGF-1R-binding but also via IRbinding which is contrary to common assumptions. Observations of this dimension have not been described in literature yet and provide an interesting approach for cancer therapy.
In addition, receptor KD data might explain why cancer treatment with antibodies directed against the IGF-1R only has not revealed the expected success in NSCLC types. Dual inhibition of IGF-1R and IR most likely represents a more successful approach.