Rapid astrocyte morphology changes during epileptogenesis in the rodent hippocampus 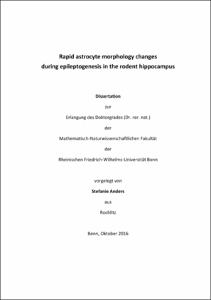