Action of zona pellucida glycoproteins in mouse and human sperm 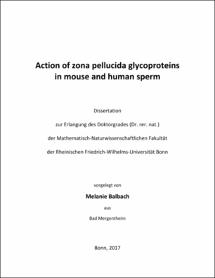