A gateway to new physics: direct measurement of the top Yukawa coupling to the Higgs boson 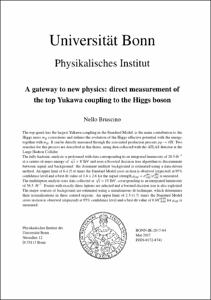