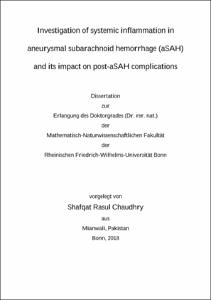 500 Naturwissenschaften
Chaudhry, Shafqat Rasul: Investigation of systemic inflammation in aneurysmal subarachnoid hemorrhage (aSAH) and its impact on post-aSAH complications. - Bonn, 2018. - Dissertation, Rheinische Friedrich-Wilhelms-Universität Bonn.
Online-Ausgabe in bonndoc: https://nbn-resolving.org/urn:nbn:de:hbz:5n-50653
@phdthesis{handle:20.500.11811/7561,
urn: https://nbn-resolving.org/urn:nbn:de:hbz:5n-50653,
author = {{Shafqat Rasul Chaudhry}},
title = {Investigation of systemic inflammation in aneurysmal subarachnoid hemorrhage (aSAH) and its impact on post-aSAH complications},
school = {Rheinische Friedrich-Wilhelms-Universität Bonn},
year = 2018,
month = may,
note = {Aneurysmal subarachnoid hemorrhage (aSAH) is a dreadful disease with overwhelmingly high mortality and morbidity, although it accounts for only 5% of all strokes. Around half of the affectees are destined to death and it affects at relatively younger age. About 20% of the patients die before hospitalization and 40% - 60% within a month. Rupture of the intracranial aneurysm floods the subarachnoid space with blood and sometimes also involves brain ventricles and deeper brain parenchyma. Although, the obliteration of the bleeding aneurysms can be successfully achieved by neurosurgical clipping or endovascular coiling, but still a significant proportion of aSAH patients succumbs to life threatening complications such as CVS, DIND, seizures, chronic hydrocephalus, cerebral ischemia, infections and achieves poor clinical outcome. Failure of the CVS reversal paradigm to improve clinical outcome has led to reassess the role of inflammation in aSAH and its associated complications. Over the past, a role of systemic inflammation is well appreciated and the aim of our study was to assess systemic inflammation after aSAH and its associated complications.
Sterile inflammation is set into play after engagement of the DAMPs with PRRs on immune cells leading to their activation and polarization with the consequent release of inflammatory mediators such as cytokines. In order to characterize the systemic inflammation after aSAH, we have investigated the release of prototypical DAMPs members such as HMGB1, mitochondrial DNA, IL-1α and IL-33 after aSAH. Different pro-inflammatory and anti-inflammatory cytokines such as IL-23, IL-17, IL-6, IL-10 and CCL5 (RANTES) were analyzed at day 1 and day 7 after aSAH. The immune cells specifically monocyte subsets and CD4+ T helper subsets were analyzed by polychromatic cell surface based flow cytometry during early and delayed brain injury phases after aSAH.
Assessment of the DAMPs response showed significant elevation of serum HMGB1 after aSAH from day 1 until day 13. Interestingly, serum HMGB1 levels were significantly elevated in aSAH patients developing CVS early from day 1 until day 13. Hence, HMGB1 may have a prognostic potential for CVS after aSAH. Mitochondrial DNA gene fragments such as CytB, D-Loop and COX-1 were significantly elevated early after aSAH with exception of CytB, achieving significance at day 7. Serum mtDNA gene fragments showed differential associations with different aSAH patients’ associated characters, complications and clinical outcome. However, IL-1α and IL-33 were rarely detectable in the systemic circulation after aSAH.
Among the cytokines, systemic IL-23 and IL-17 inflammatory axis was significantly upregulated after aSAH. However, subtle associations exist among subgroup analysis based on data dichotomization. The well-known acute pro-inflammatory cytokine, IL-6 was also evaluated after aSAH and serum IL-6 levels represented as an unspecific marker of aSAH associated complications and clinical outcome. The pro-inflammatory chemokine and cytokine CCL5 (RANTES) was also significantly elevated after aSAH, but CCL5 levels were significantly decreased at day 7 in patients who developed chronic hydrocephalus and pneumonia infection. Interestingly, CCL5 levels were significantly higher in good clinical outcome aSAH patients at day 7 after aSAH. Serum IL-10 levels were also significantly elevated and showed significant association with CVS, chronic hydrocephalus and infections at post-SAH day 7. Intriguingly, serum IL-10 levels were significantly elevated in poor clinical outcome patients at day 1 and day 7 after aSAH.
Monocytes were non-significantly increased after aSAH. Intermediate monocytes were significantly higher at post-SAH day 1 compared to day 7, while nonclassical monocytes were significantly decreased compared to healthy controls at day 1. The CX3CR1+ intermediate and nonclassical monocytes showed the similar significant differences as that of their parent populations. Intriguingly, classical CCR2+ monocytes significantly increased on post-SAH day 1 as compared to controls and intermediate CCR2+ monocytes compared to post-SAH day 7. Finally, HLA-DR+ classical monocytes were significantly reduced after aSAH at both day 1 and day 7 compared to controls, while intermediate and nonclassical HLA-DR+ monocytes showed significant differences as that of their parent populations. Interestingly, CD4+ T cells were significantly increased after aSAH. Interestingly, Th2 cells were significantly reduced at day 7, whereas Th17 cells increased compared to day 1 post-SAH. However, Treg cells were significantly increased at both assessment days compared to controls. These subtypes also revealed some interesting significant differences regarding their activation states assessed by CD38 and HLA-DR expression.
All these findings reflect an upregulated systemic inflammatory response after aSAH, which may underlie different post-aSAH complications and affect the clinical outcome. Moreover, the pro-inflammatory and anti-inflammatory factors are differentially regulated over time after aSAH during the development of complications. These investigations unveil the possible role of systemic inflammatory mediators as potential diagnostic and prognostic markers.},