Search for the <em>H → b<span style="text-decoration: overline">b</span></em> Decay of the Standard Model Higgs Boson in Associated Production with Vector Bosons Using ATLAS Data at √s = 8 TeV
Dokumentanzeige
JavaScript is disabled for your browser. Some features of this site may not work without it. 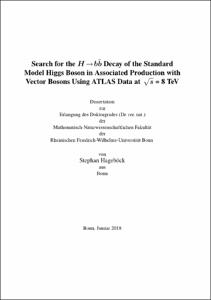 In this thesis, a search for the H → bb decay of the Standard Model Higgs boson is presented. A dataset of 20.2 fb-1 recorded by the ATLAS detector at CERN is searched for events where Higgs bosons are produced in association with a vector boson that decays to charged leptons at a centre-of-mass energy of √s = 8 TeV. Machine learning with boosted decision trees is used to implement the most sensitive V H → V bb search on √s = 8 TeV LHC data with charged leptons, the ATLAS search published in 2015. It is further shown that the machine-learning part of this search can be improved by training boosted decision trees with Lorentz-invariant observables, which increases the sensitivity by 10 %, and reduces systematic uncertainties by 16 %. For a Higgs boson of mH = 125 GeV, a local excess over the background prediction at 99.2 % confidence level is observed, which corresponds to a discovery significance of 2.4 σ, whereas 1.9 σ were expected from simulations. The ratio of the observed signal strength compared to the Standard Model prediction is μ = 1.3 +0.7 -0.6.