Uniform estimates in one- and two-dimensional time-frequency analysis 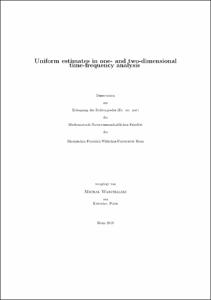