The Idolatry of Philosophy 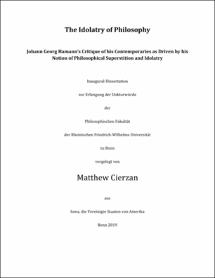 The present work argues that Johann Georg Hamann's (1730-1788) critique of his contemporaries was driven by his notion of superstition and the corresponding idolatry. This bases itself on his broad understanding of faith, and further, its misappropriation (i.e. superstition). It outlines the motivation behind his authorship and his loose philosophical approach as he challenged the thinkers of his era via rigid critique sprinkled with wit. This distinctive style of critique runs throughout the variety of his thought. Although his criticism is informed by theology, it will be established that it is fundamentally philosophical insofar as its approach retains its poignancy removed from its religious foundations. This is not to be confused as asserting that Hamann's thought was not theological; indeed, it was immersed in the Christian idiom - e.g. his idea of the condescension of God and its relationship to human knowledge. Be that as it may, this work will elucidate that his critique of his contemporaries was of a philosophical nature. Moreover, he resolved the tendency to create philosophical idols with an approach that here is termed hermeneutics of humility, and is based on the interdependency of the faculties of knowledge, a convivial understanding of reason, and the contingency of thought.