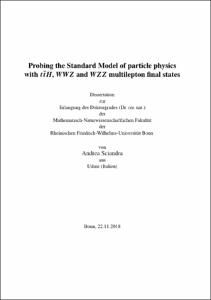 The Standard Model of particle physics elegantly describes the fundamental constituents of matter and their interactions. The electroweak gauge and top-quark Yukawa couplings can be directly probed in the associated productions of three massive vector bosons and the Higgs boson with a top-quark pair, respectively. Two dedicated searches in multilepton final states are presented in this dissertation, using data collected in 2015, 2016 and 2017 with the ATLAS detector at the Large Hadron Collider. Both analyses are performed with proton-proton events corresponding to an integrated luminosity of 80 invfb at a centre-of-mass energy of 13 TeV and exploit multivariate techniques to discriminate between signal and background processes. A best-fit value of 1.0+1.0-0.7 is measured for the ttH signal strength mu_(ttH)=sigma_(ttH)^(obs) / sigma_(ttH)^(SM) in the non-resonant four-lepton final state, corresponding to 1.5 sigma for the rejection of the no-ttH hypothesis. The latest ATLAS ttH combination, involving several channels, has provided observation of ttH production and, therefore, top-quark Yukawa coupling.The first search for the production of the WWZ and WZZ processes has allowed to reject the background-only hypothesis at the 2.9 sigma level. The combination of this analysis with the WWW search provides evidence for the production of three massive vector bosons, rejecting the no-VVV hypothesis at the 4.0 sigma level and yielding a best-fit signal strength of mu_(VVV) =1.4+-0.4.