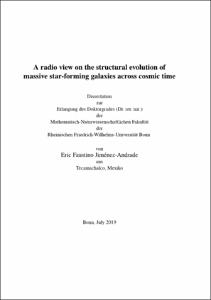 Jiménez-Andrade, Eric Faustino: A radio view on the structural evolution of massive star-forming galaxies across cosmic time. - Bonn, 2020. - Dissertation, Rheinische Friedrich-Wilhelms-Universität Bonn.
Online-Ausgabe in bonndoc: https://nbn-resolving.org/urn:nbn:de:hbz:5-57257
@phdthesis{handle:20.500.11811/8269,
urn: https://nbn-resolving.org/urn:nbn:de:hbz:5-57257,
author = {{Eric Faustino Jiménez-Andrade}},
title = {A radio view on the structural evolution of massive star-forming galaxies across cosmic time},
school = {Rheinische Friedrich-Wilhelms-Universität Bonn},
year = 2020,
month = mar,
note = {It is not well understood what processes regulate the global formation of stars in galaxies throughout cosmic history. My work aims to measure the structural evolution of star-forming galaxies (SFGs), from the present back to when the Universe was ten percent of its current age. I focus on the population of massive SFGs with a total stellar mass that is one to ten times that of the Milky Way. I investigate possible differences in physical processes that regulate star formation throughout cosmic history, to address why typical massive galaxies in the early Universe formed stars an order of magnitude more intensely than today.
I analyze observations at sub-millimeter-to-radio wavelengths of a large sample of 3184 massive SFGs in the COSMOS field. I inspect the spatial distribution of star formation (traced by radio continuum emission) in galaxies of the sample, and investigate how their molecular gas content (traced by carbon monoxide line emission) affected the star formation activity. I find that over the past 10 Gyr (redshift < 2) star formation in typical massive SFGs occurred out to large radii, strengthening the (previously) proposed scenario whereby typical massive SFGs are rotating disks with widespread star formation activity. On the other hand, I find that massive SFGs with enhanced star formation rates show more compact activity, which is consistent with expectations that star formation here is triggered by galaxy mergers that induce nuclear starbursts. I find that over the past 10 Gyr, the star formation rate per unit area in massive SFGs has declined at a rate that is related to the molecular gas content. In the early Universe, typical massive SFGs converted molecular gas into stars more efficiently than present-day galaxies do.
I present detailed studies of two massive SFGs in the very early Universe (12.5 Gyr ago, redshift = 4.5) that show extended, gas-rich disks with very high star formation rates and elevated star formation efficiencies, similar to that observed in present-day, merger-driven starbursts. Apparently, at these early epochs, strong gas accretion from the intergalactic medium fed unstable, gas-rich disks that broke into giant clumps that formed stars at high rates. I also show that in the very early Universe, the high star formation rate of satellite galaxies around massive SFGs drove large-scale outflows, which prevented further gas accretion and thus might have suppressed star formation in such companion galaxies.
I conclude that throughout most of cosmic history, star formation in typical massive SFGs was primarily regulated by the smooth accretion of cold gas from the intergalactic medium, which sustained steady star formation activity in extended, rotating disks. The more intense star formation in early galaxies resulted from their larger gas reservoirs, which were distributed across fragmenting, gravitationally unstable disks. In this respect, the stellar birthrate and star formation efficiency of typical massive SFGs in the early Universe were similar to those observed in local, merger-driven (maximal) starbursts.},