Of Liars and Deniers 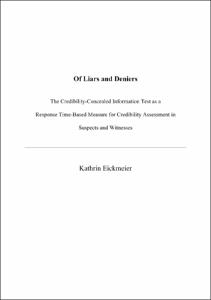 There are numerous studies on polygraphs like the Concealed Information Test (CIT) that aim to detect whether a suspect possesses crime-related knowledge. In contrast, not a single psychophysiological or behavioral paradigm targets the credibility of a victim’s accusation. For that purpose, a Credibility-CIT was developed in four studies. Participants experienced certain situations (truth tellers) or invented a story about these events (liars). Subsequently, the participants were interviewed about the alleged occurrences. The methodological innovation is that the given testimony served as an individual database for the items used in the Credibility-CIT: Short phrases that either referred to a lie or a true statement were selected from each participant’s testimony. These idiographic items, called credibility probe items, were presented in the Credibility-CIT amongst several distractor items while response times and error rates were recorded.
Results of three studies indicate that liars respond more slowly than truth tellers to credibility probe items (dStudy 1 = 0.55, dStudy 2 = 0.42, dStudy 4 = 0.47). Different encoding processes and emotional-motivational factors that induce varying orienting responses provide an explanation for the response time differences. In contrast, Study 3 did not indicate significant differences between truth tellers and liars. Methodological issues – especially regarding the selected response deadline – are discussed. In addition, EEG data were recorded in Study 4 but event-related potentials did not discriminate truth tellers from liars. Lastly, a meta-analysis was conducted over the four studies included in this research project. An overall effect size of g = 0.40 was observed for the Credibility-CIT’s efficiency to discriminate truth tellers from liars based on response times. The results indicate that the Credibility-CIT has a meaningful potential as an indirect measure for credibility assessment.