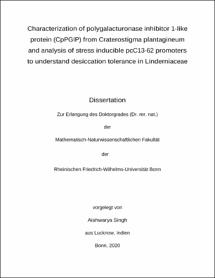 The work is divided into two major parts. The first part is the characterization of an important cell wall protein “polygalacturonase inhibitor 1-like protein (CpPGIP)” and in the second part we studied “stress inducible pcC13-62 promoters” to understand regulatory promoter elements triggering gene expression related to desiccation tolerance in Linderniaceae.
The CpPGIP gene was cloned and the corresponding recombinant protein was purified. Quantitative analysis of the expression of the gene revealed that CpPGIP transcripts accumulate at a much higher level when the plant is under dehydration stress than without stress. The recombinant CpPGIP protein was purified and was studied during various stress conditions to understand its role and importance when the plant is subjected to stress. A yeast-two-hybrid assay identified potential candidates which might be interacting with the CpPGIP protein by forming complexes and thus helping in running the plant machinery on the cellular level. We hypothesize that PGIP might play an important role in the cell wall maintenance of C. plantagenium.
The expression of the gene pcC13-62 was analysed in C. plantagineum and in the closely related desiccation-tolerant species L. brevidens and the desiccation sensitive species L. subracemosa. The study demonstrated a correlation between promoter activity and gene expression levels, suggesting transcriptional regulation of gene expression. A detailed expression pattern of the 13-62 promoter was determined by histochemical β‐glucuronidase (GUS) staining of transgenic plants that harboured a pcC13-62 promoter::GUS reporter construct. Comparison of promoter sequences identified a dehydration-responsive element in the promoters of the tolerant species which is required for dehydration-induced β-glucuronidase (GUS) accumulation. We hypothesize that variations in the regulatory sequences of the pcC13-62 gene might be required for desiccation tolerance. Comparison of the promoter regions revealed that promoters have different activities, but some functional cis‐acting elements remain conserved.
The study of both the candidates provides more insight into the evolution of the molecular basis of desiccation tolerance in the plant C. plantagineum.