Control of ion and neurotransmitter homeostasis by hippocampal astroglial networks 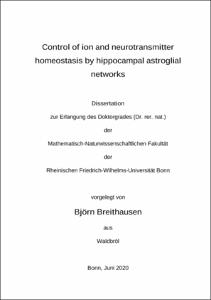