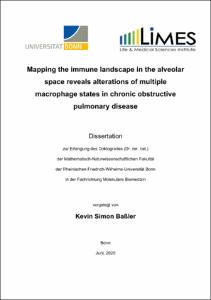 Chronic obstructive pulmonary disease (COPD) is ranked among the three leading causes of death worldwide and hence constitutes a significant burden, both medically and financially. The disease is characterized by a poorly reversible airway obstruction which is mainly caused by chronic inflammation of the lung followed by destruction of the parenchyma. However, the cellular mechanism underlying COPD is poorly understood and thus no effective therapy is currently available.
To broaden the current knowledge, we determined disease-related changes in cellular and molecular compositions within the alveolar space and peripheral blood of a cohort of COPD patients and controls using a machine-learning based cell annotation approach and a distribution-free method for differential gene expression testing in single-cell transcriptomes. Myeloid cells were by far the largest cellular compartment in the alveolar space with invading and proliferating macrophages elevated in COPD. Functionally, macrophages in COPD showed reduced HLA expression, accumulation of cholesteryl ester, reduced cellular chemotaxis, and mitochondrial dysfunction. Modeling cell-to-cell communication, signaling pathway usage, and transcription factor binding analysis predicted TGF-β1 to be a major upstream regulator of transcriptional changes in alveolar macrophages of COPD patients. Together, these results indicate that alveolar macrophages in COPD exhibit functional changes with aspects of an impaired immune activation. Furthermore, we provide evidence that the identified molecular alterations are not limited to alveolar macrophages but are also found at a more systemic level.