Comparative Analysis of Open Linked Fiscal Data
Dokumentanzeige
JavaScript is disabled for your browser. Some features of this site may not work without it. 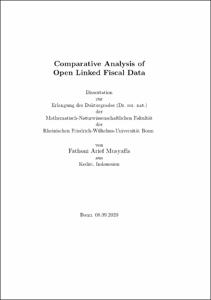 004 Informatik
Musyaffa, Fathoni Arief: Comparative Analysis of Open Linked Fiscal Data. - Bonn, 2021. - Dissertation, Rheinische Friedrich-Wilhelms-Universität Bonn.
Online-Ausgabe in bonndoc: https://nbn-resolving.org/urn:nbn:de:hbz:5-62298
@phdthesis{handle:20.500.11811/9114,
urn: https://nbn-resolving.org/urn:nbn:de:hbz:5-62298,
author = {{Fathoni Arief Musyaffa}},
title = {Comparative Analysis of Open Linked Fiscal Data},
school = {Rheinische Friedrich-Wilhelms-Universität Bonn},
year = 2021,
month = jun,
note = {The open data movement within public administrations has provided data regarding governance publicly. As public administrators and governments produce data and release the data as open data, the volume of the data is highly increasing. One of these data sets is budget and spending data, which has been gaining interest to the extent that several working groups and CSO/NGOs started working on this particular open data domain. The majority of these data sets are part of the open budget and spending data sets, which laid out data regarding how public administrations plan, revise, allocate, and expense their governance funding. The disclosure of public administration budget and spending data is expected to improve governance transparency, accountability, law enforcement, and political participation.
Unfortunately, the analysis of budget and spending data sets is not a trivial task to do for several reasons. First, the quality of open fiscal data varies. Standards and recommendations for publishing open data are available, however, these standards are often not met and no framework specifically addresses fiscal data quality measurements. Second, the data sets are heterogeneous, since it is produced by different public administrations with different business process, accounting practice, requirements, and language. This lead to a challenging task in data integration across public budget and spending data. The structural and linguistic heterogeneity of open budget and spending data makes comparative analysis across data sets difficult to perform. Third, data sets within the budget and spending domain are complicated. To be able to comprehend such data, expertise is needed both from the public accounting/budgeting domain, as well as the technical domain to digest the data sets properly. Fourth, a platform to transform, store, analyze, and visualize datasets is necessary, especially those that make the utilization of semantic analysis is possible. Fifth, there is no conceptual association between data sets, which can be used as a comparison point to analyze fiscal records between compared public administrations. Lastly, there is a lack of methodology to consume and compare linked open fiscal data records across different public administrations.
Our focus in this thesis is hence to perform research to help the community gain a better understanding of open fiscal data, provide analysis of their quality, suggest a way to publish open fiscal data in an improved manner, analyze the open fiscal data heterogeneity while also laying out lessons learned regarding their current state and supporting data formats that are capable for open fiscal data integration. Consequently, a platform to digest, analyze and visualize these datasets is devised, continued with performing experiments on multilingual fiscal data concept mapping, and wrapped up with a proof-of-concept description of comparative analysis over linked open fiscal data.},