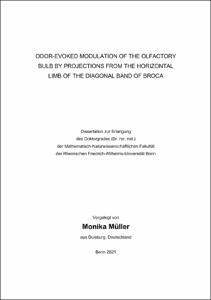 Olfactory input encodes essential information about the environment and shapes adapted behavioral reactions. Hence, the olfactory system is complex with diverse brain areas processing the sensory input on different levels. The olfactory bulb (OB), with its numerous microcircuits, is the first processing station of olfactory input. The OB output neurons transmit the processed information to other brain areas shaping the organism´s behavior. Top-down modulations from a variety of brain regions regulate the representation of odor information in the OB. Among those is the horizontal limb of the diagonal band of Broca (HDB), which neurons send cholinergic, GABAergic and potentially glutamatergic projections into the OB. These innervations modulate the spontaneous and sensory-evoked activity of a variety of bulbar neurons and ultimately shape the output relayed to other brain areas. Monitoring the neuronal activity of these HDB projections within the OB aimed to gain further insight into the effect of the top-down modulations. The use of two-photon in vivo Ca2+-imaging in awake head-fixed mice enabled the investigation of axonal responses to odor stimulation. This approach revealed sensory-driven activity in a majority of HDB axons in the glomerular layer. These responses are odorspecific and exhibit enhanced as well as suppressed activity patterns. Monitoring cholinergic and GABAergic fibers labeled with the Ca2+-indicator GCaMP6s indicated enhanced response patterns in cholinergic and predominantly suppressed response patterns in GABAergic fibers. This characteristic presumably mediates a bimodal modulation of sensory-driven responses in bulbar output neurons emphasizing certain odors over others. Thus, the representation of some odors is accentuated, which might promote odor discrimination.