<em>Dota 2</em> and <em>League of Legends</em>
Dokumentanzeige
JavaScript is disabled for your browser. Some features of this site may not work without it.

Dota 2 and League of Legends

Two of the world’s most popular video games, their cultural aspects, their genre and its definition 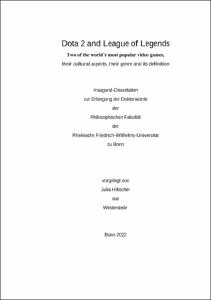 This book is a foundational work about the MOBA genre: Its history, genre, game design, cultural aspects, appeal, player & esports culture and mental health implications as well as their publishers’ monetization strategies.
Dota 2 and League of Legends have never been analysed this closely - despite the fact that the two MOBAs League of Legends (Riot 2009) and Dota 2 (VALVE Corporation 2013) are two of the world’s most popular and financially most successful video games of the past decade.
Throughout her analysis, the author extracts all genre defining elements, which could be success factors in the esports world in general, for any genre. The author rejects the existing genre term and takes the reader on a journey in coining a new one. Esports (Electronic Sports - or the competitive culture which built around these games in the past 20 years) plays an important role for the two games’ popularity, wherefore a whole chapter was dedicated to the history and outline of the global esports world. Another chapter gives a very recent and comprehensible overview for the two games’ opportunities and risks for mental health and wellbeing.