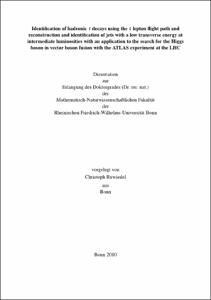 Three studies of different components of the object reconstruction with the ATLAS experiment using simulated data are presented. In each study, a method for the improvement of the reconstruction is developed and the improvements are evaluated. The reconstruction of observables sensitive to the $\tau$ lepton lifetime and their use for the identification of hadronic $\tau$ decays are the subject of the first study. In the second study, a method for the identification of jets from the signal interaction in the presence of additional minimum bias interactions is developed and applied to the central jet veto in the vector boson fusion Higgs analysis. In the third study, the effects of additional minimum bias interactions close in time to the triggered event on the cluster formation and the determination of the jet energy are evaluated and the cluster formation is modified in a way such that the bias of the reconstructed jet energy is minimized.