Single-top production t-channel cross section measurement in the electron+jets final state at ATLAS with 35 pb<sup>-1</sup> of data
Dokumentanzeige
JavaScript is disabled for your browser. Some features of this site may not work without it. 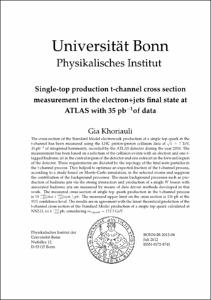 The cross section of the Standard Model electroweak production of a single top quark in the t-channel has been measured using the LHC proton-proton collision data at $sqrt{s}=7$ TeV, $35 {\rm pb}^{-1}$ of integrated luminosity, recorded by the ATLAS detector during the year 2010. The measurement has been based on a selection of the collision events with an electron and one b-tagged hadronic jet in the central region of the detector and one extra jet in the forward region of the detector. These requirements are dictated by the topology of the final state particles in the t-channel process. They helped to optimize an expected fraction of the t-channel process, according to a study based on Monte-Carlo simulation, in the selected events and suppress the contribution of the background processes. The main background processes such as production of hadronic jets via the strong interaction and production of a single W boson with associated hadronic jets are measured by means of data driven methods developed in this work. The measured cross section of single top quark production in the t-channel process is $59 ^{ +44}_{ -39} ({\rm stat.}) ^{+63}_{-39} ({\rm syst.})$ pb. The measured upper limit on the cross section is $226$ pb at the 95% confidence level. The results are in agreement with the latest theoretical prediction of the t-channel cross section of the Standard Model production of a single top quark calculated at NNLO, $64.6 ^{ +3.3}_{ -2.6}$ pb, considering $m _{t-{\rm quark}}=172.5$ GeV.