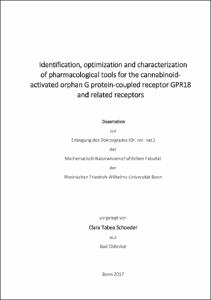 Cannabinoid receptors comprise two classical subtypes, CB1 and CB2, which belong to the large family of G protein-coupled receptors (GPCRs). They are the major targets of cannabinoids such as tetrahydrocannabinol (THC), the main psychoactive ingredient of Cannabis sativa. However, cannabinoids also interact with additional GPCRs, namely the orphan receptors GPR18 and GPR55. These receptors have been described to be involved in inflammatory diseases, but due to the lack of well-characterized pharmacological tool compounds their validation as drug targets has remained elusive. Here, we aimed to identify new ligands, agonists and antagonists, for these orphan cannabinoid-interacting GPCRs to support their (patho-)physiological characterization.
In a β-arrestin recruitment assay, we identified agonists and antagonists for both, GPR18 and GPR55, evaluated their suitability as lead structures and analyzed structure-activity relationships. For GPR18, we identified the first non-lipid-derived synthetic agonist known to date, PSB-KK-107, with an EC50 value of 0.556 µM. Subsequently, potency and selectivity was optimized based on structure-activity relationship studies resulting in the optimized GPR18 agonist PSB-KK-1415 with an EC50 value of 0.0191 µM. This compound class was found to be selective versus GPR55, CB1 and CB2 receptors. In a further study, chromen-4-one derived GPR55 agonists were studied and pharmacologically characterized. The obtained compounds will serve as valuable tool compounds for studying GPR55.
Furthermore, synthetic cannabinoids were investigated, which had been reported as constituents of incenses (called “spice”). The pharmacological characterization of these highly potent CB receptor agonists will help to classify their toxicological potential and guide decisions on their legal restriction.